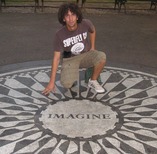 Mert Ozcan is a producer/engineer/mixer, songwriter, and guitarist from Ankara, Turkey. He has produced/recorded tracks in a variety of genres such as pop, jazz, rock, R&B, Brazilian.
He started playing guitar in his high school years and now he is a degree student at Berklee College of Music majoring in Music Production and Engineering. He plays blues, funk, rock and R&B. He gives a lot of importance to improvisations. “I try to add something new to the song every time I play it.” Besides being a performing musician and songwriter he does a lot of production and recording for others as well. “It’s a wonderful part of the creative process to tap into a piece of music and make it even better by arranging, getting killer performances and capturing those in the best possible way.”

“Unfortunately we didn’t have any LPs or anything like that in the house when I was growing up so I didn’t had the chance to explore music by going through old records however I was always fascinated by music. The sounds I was hearing from the radio was magical to me but I didn’t know how people were able to produce those sounds. So by the time I was 15 I decided to learn it.
My first introduction to rock music was through the Red Hot Chili Peppers. They are still my favorite band and my biggest influence. It’s by watching their interviews that I developed my taste and knowledge of music. They would talk about their influences and I would go to the music store and buy those people’s albums.
The Red Hots didn’t influence me just on a musical level. Their commitment to being the best musician they can be and continue making music regardless of the many unfortunate events they faced during their career influenced me to make the best music I can make no matter what.”

Other than the Red Hot Chili Peppers he is also influenced by Jimi Hendrix, Funkadelic, The Beatles, The Doors, Joss Stone, Lou Reed, Led Zeppelin, Nirvana and many more.

To emphasize the importance of music in his life he says: “Music became a spiritual place for me as I developed into a musician. Nevertheless it is still what it was to me when I was a kid. The only difference is that now I get to stay in that place and not just visit it, which is great because I love it there!”

“I simply aspire to create music and make people feel better by doing so.”