Online Student
Never give up.
Boston, MA
Member since 2011 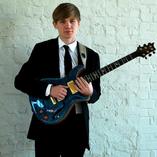 Since picking up the guitar at the age of 13 Bert Cheshire’s life focus has been music. After 10 years of intense private instruction and attending Atlanta Institute of Music he is now continuing his education at Berklee College of Music in Boston, MA. Bert stayed busy performing, writing, recording, and teaching all styles of music in the southeast and is now making his mark in the north. After honing his initial style and chops performing in church then in the regionally touring band Capsule Corp. Bert was able to work as an on staff musician at the University of South Carolina – Aiken from 2011 – 2013. Working at the university opened up many opportunities to teach and perform throughout the Georgia – South Carolina area. Since arriving at Berklee Bert has been busier than ever performing with many great musicians from all over the world on studio sessions and gigs utilizing both guitar and bass. Drawing from many styles such as jazz, classical, post-rock, EDM, fusion, bluegrass, and minimalism Bert’s unique sound, original style, creative energy, and hard-working attitude keeps him busy and much sought after in the music industry.

“Music is the one incorporeal entrance into the higher world of knowledge which comprehends mankind but which mankind cannot comprehend.” – Ludwig Van Beethoven. Everyone interprets music differently and can be affected on many different levels. Instrumentally or lyrically, music can have the power to bring someone to their knees or even make them feel as if they’re flying. Music to me seems to be the greatest gift of life. Entirely it’s own entity not existing in the physical plain it still the power to affect people on a larger scale than an atomic bomb.

For me music has always been an escape and a refuge from the hardships I have faced throughout my life. Times where I had no one to turn to I found comfort and strength in music to carry on. I am a person who often has difficulty expressing exactly how I feel verbally and it seems sometimes the only way I can get exactly what I want out is through my writing or playing. Now in my second decade of playing music I get even more out of music than I did when I started. Raised on classic rock, soul, and pop music as a child, my progression as a musician can be widely attributed to the discovery of new music and sounds. The deeper I dig as a musician the deeper I get as a listener discovering new styles and artists all the time. You could say that my ear has an appetite that just will not be satisfied no matter how much it is fed. My ear is not picky it just wants to be nourished. Whether it’s jazz, classical, electronic, rock, hip-hop, ambient, bluegrass, metal, etc., I find beauty in it all. I have gone through so many different musical phases throughout my life and by taking all of the influences with me along my journey I strive to create music that is familiar, cohesive, and relevant at the same time unique, fresh, and completely original. I also feel that there is so much healing power and joy to be realized from the music already out there that it is my duty to absorb as much as possible then share all the pieces I have taken though my music. I hope that the music I create can bring people the same joy, refuge, or strength that music has brought me and ultimately inspire others to try to do the same.