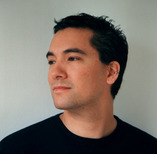 Erik Hawkins is a composer, producer, remixer, and author whose talents and technical expertise have leaders in the music industry calling him a “taste maker.” He has worked with and remixed a variety of top artists, including Irene Cara, Digital Underground, Conscious Daughters, Strypper, Brenda Russell, and DJ Sasha. His own progressive dance music tracks have been used by major television networks and film studios, including ABC, CBS, MTV, Nickelodian, and New Line Cinema. Some of the TV shows and films in which his music can be heard include, Ugly Betty, CSI:Miami, Burn Notice, Big Brother, The Last Day of Summer, The Disaster Movie, and The Informers.

More than one hundred of his articles have appeared in the industry’s top publications, including Electronic Musician, Mix, and Keyboard. He’s had monthly columns in Remix, MC2, and DigiZine. He has authored several books, including Studio-in-a-Box (ArtistPro, 2001) and the Complete Guide to Remixing (Berklee Press, 2003). Currently, he teaches Pro Tools 110, Producing Music with Reason, and Remixing with Pro Tools and Reason, right here, for Berkleemusic.

For lots of cool music production tips and tricks, check out his Berkleemusic blog page,
http://erikhawkins.berkleemusicblogs.com