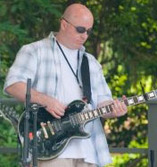 A musician of 20 years and a pioneer of the “Rock Band Class” phenomenon, Tony Bonelli has been dedicated to teaching private music lessons and rock band classes to students from Sandwich, Hyannis and all of Cape Cod since 1997. He stays very much in tune with today’s pop culture and his unique ability to communicate music to his students builds a sincere sense of enthusiasm and real results.

Tony grew up surrounded by classic rock as most of his family members are musicians and/or avid listeners. From age 13 through high school, he practiced and studied music 3-5 hours a day and aced his music theory classes. During that time, Tony performed as a lead guitarist in several bands including original progressive rock band Deviation. Later he performed 3-5 nights a week as a lead guitarist/lead vocalist in retro show band Daughter Judy for 3 years. Tony has studied guitar and music theory with Kevin Murphy, drums with Martin Vasquez and voice with Donna Prypin.

By his mid-teens, Tony was teaching children from his neighborhood informally and was hired by two different local parents to teach their son and daughter beginner piano and theory. His teaching career started more officially in 1997 when he began to aid director Kari Lee as a driving force in the development of her local music school Score Music Studios. There he carried up to 60 students per week and started to develop his rock band class curriculum coaching up to 5 rock band classes per week.

Tony has performed in and conducted business for regionally successful live bands. He has been running his recording studio since 2000 producing several album projects and numerous demo projects. He also has owned a successful live sound reinforcement business since 2000 working with bands that play rock, blues, reggae, ska, and jazz. Through local night clubs Kendrick’s and Pufferbellie’s he has engineered live sound for R&B, Hip Hop, Rap, and Reggaeton artists including such high profile entertainers as Nappy Roots, Flavor Flav, Sugar Hill Gang, and Mr. Vegas.

In July of 2005 Tony opened Mode 4 Music Studios and now keeps busy teaching 70 students and 12 band classes per week. From 2007 to 2009 he was a partner in the School to Careers Partnership through Dennis-Yarmouth Regional High School taking in an intern 4 days a week during the school year. In July of 2009 Tony achieved a 3.87 GPA with the completion of a Production and Guitar Master Certificate through BerkleeMusic, the NEASC accredited and UCEA award winning online extension school for Berklee College Of Music in Boston. He is a full member of the Audio Engineering Society (AES) and an associate member of The Recording Academy. In the winter of 2010, Tony passed the Pro Tools 200 level courses at New England Institute of Art and is now a Digidesign certified Pro Tools HD8 Operator.