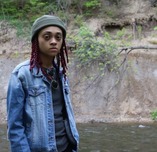 Born in Detroit Michigan, but raised in the suburbs of Rochester Hills Kaitlynn Merritt (better known as her stage name KayK) has been involved in music since the young age of only eight. Music first was introduced to her by her father who forced her to take classical piano lessons because he believed that it would help her have a better chance of having a successful career
in music. At age ten Kaitlynn had begun to write songs and verses over her favorite songs, which eventually lead her to rapping. Entering middle school Kaitlynn joined the concert band in 6th grade and played the French Horn all the way through high school. In 2012 Kaitlynn was accepted to Berklee College of Music in Boston, MA and is currently studying there.